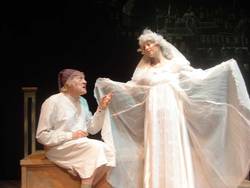 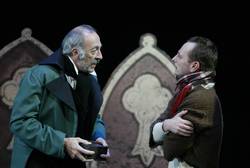 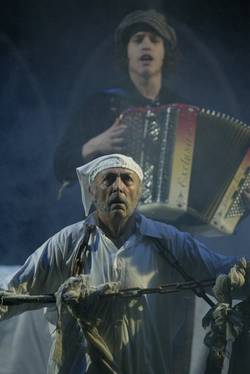 On Friday, the 8th of December 2017, several classes of the Abendschule für Erwachsene Kassel went to the Staatstheater Kassel and watched the play “A Christmas Carol“ by Charles Dickens performed by the “American Drama Group“.

In the beginning, I would like to mention what the play deals with.

On the occasion of the upcoming Christmas holidays, Scrooge, the protagonist, puts his worst instincts on display around his friends and family and behaves in a very nasty way. He hates Christmas and does not want to participate in the Christmas preparations. When going to bed one day before Christmas, an old friend appears as a ghost and shows him the consequences of his behaviour. His old friend is followed by some other ghosts. It seems obvious which fate he is about to expect.

First of all, the actors were great. They acted with a lot of humour. For example, the door of Scrooge’s house was played by an actor and he even imitated the noise of the old squeaky door. That was a very funny moment and the audience laughed.

Another important aspect is that the play was not too sentimental. At one moment, it was a bit sad. Furthermore, the scenery was very versatile. Also, the actors did a great job, because they played more than one role. In conclusion, I would say, I am happy that I spent my time in the play and I hope we can do more trips like that with our class!

We also would like to express our thanks to the Förderverein der Abendschule Kassel for supporting us with the entrance fee.